Anonymous asked: I have read several good fics about Dark!Sherlock as a psychopath but there seems to be a lack of Dark!John. What do you think Dark!John would be like?

Personally, I think Dark!John would be far more disturbing, scary and down right horrific than anything Dark!Sherlock could be.

Much of the fanfics out there featuring Dark!John don't explore the full extent of what he could do with his medical knowledge (and ample equipment). Shooting people pales in comparison to the really gruesome things that he can do even without access to a nice load of dangerous medical equipment.

I really shouldn't say this but medicine inadvertently teaches its disciples just as many ways to harm as it does to heal. You have to know what will kill the patient so you can make sure it doesn't happen. However how you use medical knowledge almost entirely depends on your moral compass.

Dark!John, a man without moral or ethical principles would be an incredibly dangerous person.

Doubtless he knows all the easy methods of killing someone quickly: potassium, insulin etc. I'm sure he would also know exactly how to kill someone slowly, painfully with a dramatically horrific flair.

I feel that if John really was a psychopath and a sadist he would be far more dangerous than Sherlock because of what he's learnt as a doctor.

(The rest of this may disturb readers and make you never want to see a doctor or read my blog ever again. Warning gruesome pictures under cut)

1. Enucleation (of the eye) - that's the just that fancy term for pulling out the eyeball but leaving all the muscles in. Can you imagine having your eyeball surgically extracted whilst strapped to a table with no pain relief? And the sickening sound of someone squeezing your eyeball as they pull it out of the socket? Yeah - that's gruesome. Also you'll see the knife as it approaches your eye and you'll also see the fiendish expression on Dark!John's face all the way until he cuts the nerve at the back of the eyeball...but that won't be for quite some time.

I have personally assisted in cutting out the eyeball of a cadaver - for a corneal transplant. It takes more than an hour to dissect all the muscle away from the eyeball and when you pull it out...it's one of the most gruesome things I've ever seen.

1.1 Lumbar puncture needle to the eye - if anyone has had an LP, you might remember the needle is about 10-15cm long. Slowly sliding this piece of equipment into someone's eye and then out of the back of the eye socket into the brain whilst they have their eyes taped open so they can see the needle going in...

2. Lobotomy - tying someone to a chair and hammering ice picks into their brain through the corner of their eyes comes pretty high on my list of Dark!John activities. This was actually a standard medical procedure up until the 1960s for many psychiatric conditions. It's got a surprisingly low mortality rate and the victim would end up with serious brain damage but mostly to their executive functions. So they'd still be able to do ordinary tasks - but they would be unable to perform higher cognitive functions such as organizing their time or planning an escape. Personality changes also occur but usually victims become more..."docile", though this may be propaganda rather than hard scientific fact. It's a great way to make victims "obedient" to certain extend should Dark!John want to keep them around.

3. Transurethral...anything -  Any procedure that sticks hard, sharp objects up the urethral (the tube that pee comes out of) without pain relief is just pain nasty. It will not only be horrendously painful, it will also leave lasting damage to the tube when the wounds heal so you may not be able to pee again without an operation.

4. Muscle relaxants - doesn't sound scary but imagine being trapped inside your own body, fully conscious but not able to move a single muscle. Imagine the panic victims would feel as they slowly suffocated to death whilst Dark!John stands above them smiling away. Muscle relaxants are reversible so should John want to, he can potentially bring people to brink of death and then back again many many times.

5. Drug Overdose - cliche but most drugs can have awful side effects. Permanent nausea would be my version of hell but there are many much more interest effects: like toxic epidermal necrosis: you skin dies in huge patches and the dead tissue sloughs off in large sticky chunks leaving you effectively with the same effect as massive burns. A very nasty way to die indeed.

6. Volvulus - If John had the inclination he could open up his patient, basically tie their bowel up in knots and sew them back up to watch their ensuing painful death. A volvulus or twists in the bowel cuts off the blood supply to that piece of gut and it will slowly die then perforate. When your bowel perforates this is very bad thing as all the bacteria living there spills out and infects your whole abdomen giving you acute peritonitis. It's excruciatingly painful, like your entire belly is on fire but it kills you slowly over 24-72 hours but you never get the bliss of unconsciousness until the very end.

7. Pancreatitis - Well aimed blunt trauma to the belly could rupture the pancreas or if you prefer a nice operation will do it too. Your pancreas is where all the digestive enzymes are stored and when the pancreas is sufficiently damaged all the enzymes leak out and you digest yourself. Needless to say it's an incredibly painful and nasty way to die.

8. Infectious disease - Ebola, Marburg or any other hemorrhagic fever would be a horrible way to die. Ebola in the late stages causes people to bleed from the eyes, mouth, nose, vomit blood and cough up blood. I can imagine Dark!John sitting in a hazard suit watching his victim clinging desperately on to life whilst choking on their own blood. Alternatively - necrotising fascitis (or the skin eating bacteria disease) could be a good way to go: if left untreated entire limbs become putrid, turn black and rot. 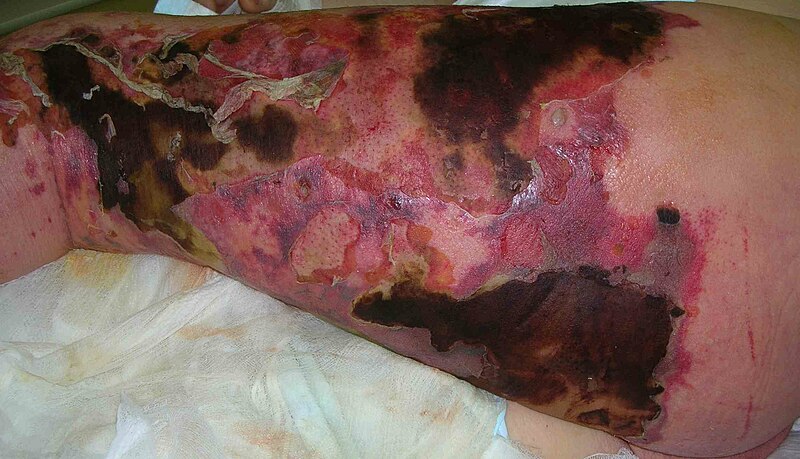 9. Psychiatric warfare - the less I say about this the better but it doesn't take too much imagination to realize that should Dark!John wish to be more subtle, he could easily convince a victim that they were crazy, section them under the mental health act (with the help of a fellow doctor) and imprison them in a mental hospital. If the hospital doesn't drive them insane the anti-psychotic medication might just do that.

10. Fracture traction - Imagine having both your legs broken and then slowly pulled apart by weights. It won't kill you for a very long time, but it would be excruciating painful all the time. A perfect way to slowly torture someone into insanity.