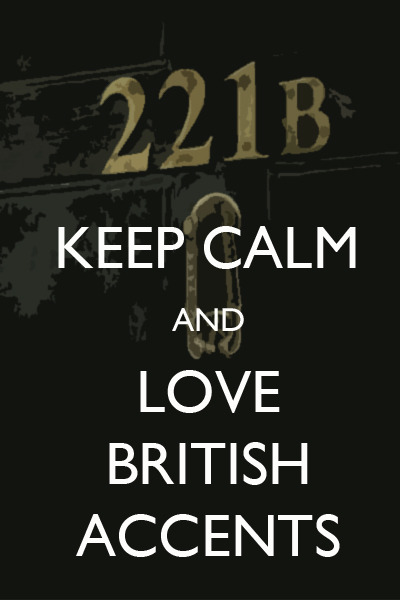 An introduction to the rich variety of British accents and an analysis of accents used in Sherlock.  I explore the distinctive regional accents and of course the ubiquitous BBC pronunciation, what the accents can tell us about the characters.

A short, not too serious guide by someone who has no linguistics expertise.

An accent for the purposes of this essay is a manner of pronunciation that is particular to an individual, community or location.

The British Isles contains are geographically small but the accents that have evolved are incredibly diverse. I grew up in the North West of England where, even though the motorway links are brilliant, travelling a mere 60 miles or so will completely change the accents that you hear.

The most ubiquitous accent in the UK is BBC pronunciation. It used to be called “Received Pronunciation” but that term has fallen out of favour. If you’ve ever watched BBC New or listened to the English programs on the BBC World Service that is the accent I am referring to. This is not a regional accent – although it is more common in South of England. When people in the UK say that someone doesn’t have an accent, they really mean the person uses BBC pronunciation.

I personally like to think of BBC pronunciation as a “non-accent”. It can tell us relatively little about the bearer.

In terms of accents in the media, the clue is in the name. In most BBC programs, unless there is a specific reason, the characters/presenters all pretty much have BBC pronunciation. Other channels follow suit although most TV channels have tried hard to include presenters with regional accents in recent times.

It is important to remember that everyone has their own individual way of speaking. We all have our quirks in pronunciation and the pitch, tone, rhythm of our speech will influence how our accents are perceived by others. People can have accents to different degrees – some people have very thick accents whilst other only have some features of a particularly accent. 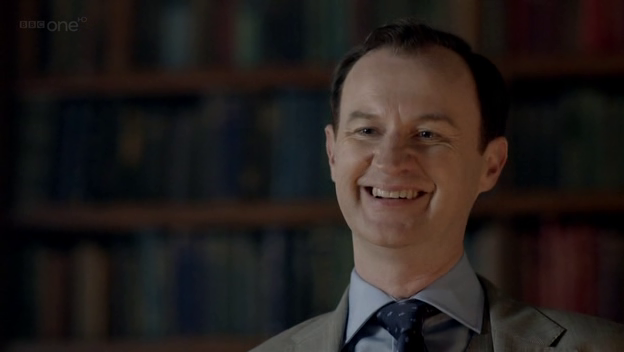 Many fans have identified Mycroft Holmes’ accent as “posh”. There is not an official “posh accent” – and even if there was Mycroft Holmes does not have it.

Posh is a very subjective description. Where I grew up anyone who didn’t have a regional accent was “posh”. After coming to University in the South, I have realised that BBC pronunciation is not considered “posh” but “standard”. Posh was defined as the rather over-exaggerated accent people often use to pantomime the rich. There are a small minority of people who have that stereotypical accent but “posh” on its own is not a very good way of describing anyone’s accent.

If we are going to talk about poshness – I believe it’s better to view it as a “gradation of poshness” which is superimposed on BBC pronunciation, rather than a distinct “posh accent”.

BBC pronunciation and the “gradation of poshness” are not good reflectors of social status in today’s society.

Traditionally BBC pronunciation was considered the preserve of the middle classes. It was something that set you apart from the common masses with their regional accents. I wouldn’t say that class has no role in today’s society, but BBC pronunciation itself has become less of a hallmark of class. Many people who would identify themselves as working class do not have a regional accent, whilst the middle-classes are more accepting of regional accents. The BBC has worked hard to introduce presenters with regional accents onto prime time television.  Therefore it is hard to judge the social status of a person purely based on how “posh” they sound. Their accent will not always match your expectations of their material circumstances.

Mycroft's accent is very much on the lower end of the "poshness gradation" because his speech is fairly close to BBC pronunciation. Deviations from Mycroft’s accent are usually due to Mark Gatiss’ own accent subconsciously creeping in.

Mark Gatiss comes from near Durham, in the North East. It’s a beautiful little city just 20 minutes train journey away from the main metropolis, Newcastle. Newcastle is the capital of the Geordie accent, a very distinctive accent that may have evolved from the influence of Norwegian sailors and fisherman who used to dock and trade at the port. The residents of Durham, despite being so close, have a softer accent which is slightly closer in nature to BBC pronunciation.

Mark Gatiss himself has spent enough time in London that I think perhaps his regional accent has become “lighter”.

Back to Mycroft: as I’ve said before BBC pronunciation can tell us relatively little about the person bearing it. What I can say about Mycroft's accent is not uncommon. It certainly fits in with the people who he would socialise with: politicians, senior civil servants etc.

David Cameron, our PM and his various public school educated lackeys all have Mycroft’s kind of “slightly-posh-but-close-enough-to BBC pronunciation” accent. I personally think some of them have made a great deal of effort to dampen down on their “poshness” to make themselves more appealing to the middle classes.

Mycroft is not a public figure - he does not do interviews or face the cameras at Prime Minister's question time. He socialises with the political elite behind the scenes. However this is not mean he hasn't also consciously modulated his accent to a certain extent. Not all MPs, political advisors and civil servants come from quite as privileged backgrounds as our current PM. In fact the opposition party: Labour, is being led by state school educated Ed Milliband, who is much less "posh" than David Cameron without even having to try. Toning down the "poshness" of his accent, is possibly one way Mycroft puts the people he has to work with more at ease. It may also be one way of publicly distancing himself from certain Lords who fulfil all the stereotypes of upper class privilege.

What Mycroft actually sounded like as a child would mostly likely to be closer to what we hear from Sherlock. 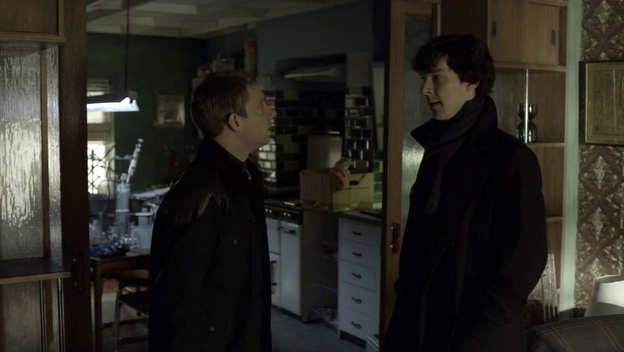 On the “gradation of poshness” he’s slightly higher than Mycroft but I think that has much more to do with Benedict’s public school education than any conscious effort on the actor’s part.

My in-universe explanation for the discrepancy is that Sherlock has no reason to modulate his accent. He is not interested in how it affects his image in the eyes of other people. We tend to learn pronunciation from our families at an early age. Some people can "lose" their accents but others have accents that stay with them for life. The way Sherlock speaks is probably a good reflection of the entire Holmes family and his public school education (A Good Old Fashioned Education).

John had me rather puzzled but my conclusion is that his accent qualifies as BBC pronunciation but unlike Mycroft or Sherlock, he has not superimposed any of those “upper class” vowels on his pronunciation. For example his “a” vowel sounds are much shorter as evidenced in words such as “pass”. John is a much better presentation of what a great number of people in the UK actually sound like.

Here is an amusing map of how the “a” vowel varies in pronunciation between different geographic areas:

John fits in very much with the blue group. His rendition of the “a” vowel is still correct and technically BBC pronunciation. However it is considered less “posh” than pronouncing the “a” vowel as “ah”.

His rhythm of speech and accentuations within words may contribute to the overall impression that his accent is different to Sherlock’s. This is true because Sherlock doesn’t have exact BBC pronunciation and neither does John. Though they deviate in different ways I would say their accents overall qualify as BBC pronunciation. It is certainly hard to pinpoint a location for the original of John’s accent.

There are times when I think I can hear something else mixed in with his generally non-descript accent.

stakeaclaim has pointed out that John's accent may be a product of his career in the armed forces. I assume that in the sealed existence of military life, John's accent might have been influenced and changed. I think in the armed forces there is a tendency for accents to regress to the mean and the mean in this case is BBC pronunciation because it is such a common accent. This does not apply to certain regiments that recruit from specific areas like Wales or Scotland. However the RAMC recruits from all over the UK so I assume that John's BBC pronunciation may have something to do with the time he spent in the army.

Lestrade’s accent is what I would call “Mockney” – an imitation cockney accent. However he doesn't quite do the accent as well as Phil Davis (the cab drive in ASIP). The cab driver's accent has all the hallmarks of a true cockney accent whereas Lestrade's accent does not.

“Cockney” was first used to describe accents in London way back in the 16th hundreds. The word “cockney” is said to originate from “coken ey” which is Middle English for cock’s egg. It was a derogatory term to describe how strange and unnatural the accent was.

London today has experienced so much immigration that Cockney is no longer the dominant accent. After the first and second world wars, many East End slums were cleared and their residents re-housed in purpose built settlements in Essex. Many towns on the outskirts of London saw massive expansion including South-end on Sea. Now it is more common to hear a derivative of the Cockney accent in Essex than it is in London.

Rupert Graves comes from Weston-Super-Mare near Bristol. From TV interviews: http://www.youtube.com/watch?v=T-UXf4GGAqs, he doesn’t speak in the same way as Lestrade does in Sherlock. Lestrade’s accent is definitely not Bristol or West Country. Rupert himself has a slight regional accent.

Back to Lestrade: I personally thought Rupert was trying to do a "light" sort-of-cockney accent but then as two commenters have pointed out: Lestrade's accent is closer to Estuary than cockney. Estuary is the accent heard mainly in Essex and the Eastern outskirts of London. It sounds (in the grand scheme of regional accents) quite close to cockney. Certainly closer than scouse is to the manchunian. So perhaps my ears are deceiving me and Lestrade is really supposed to be an Essex boy.

I am nowhere near an expert on Irish accents. Jim has an Irish accent, most likely Dublin as I have a few friends from there who speak very much like Moriarty.

Andrew Scott himself is from Dublin so this might fit rather nicely – he didn’t even have to put on a performance in terms of his accent.

Several people from Dublin have pointed out that Moriarty does have a Dublin accent but it is an exaggerated middle class south Dublin accent. It is locally known as the “D4 accent” after a postcode in south Dublin.

This particularly accent suggests Moriarty was born to a middle class family or he was educated in an establishment frequented by the well heeled middle classes. I personally think that some of Moriarty's pathos comes from a sense of inadequacy (Jim Moriarty...Hiiiii) which may have been fostered if he came from a working class family and won a scholarship to a prestigious academy. Alternatively, Jim's family immigrated to Brighton (where he presumably met Carl Powers) and was bullied by the local boys for his accent.

I was quite surprised when BBC Sherlock decided to cast Irene as British – she was in fact an American in the original story.

Irene’s accent is pretty much BBC pronunciation with a few elongated vowels thrown in at random to take her up the “gradation of poshness” to a place suited to the ears of her impressive clientele.  Otherwise I personally cannot detect any hint of a regional accent.