Irene Adler is not a Loser - Part 1

I really love Irene Adler in BBC Sherlock, but even more I love the complex plot of A Scandal In Belgravia. This meta is dedicated to discussing the intrigues and deceptions that are only hinted at on screen and play out behind the scenes. I aim to show everyone why Irene is not a loser but an incredibly intelligent and ambitious woman. On the way I explore:

A Disclaimer before we start...

This piece isn’t about sexism or the portrayal of women in the media. It’s much more focused on the plot of ASiB and analysis of Irene’s motives as if she was a real person, not an artificial construct presenting a particular literary troupe. Certainly, there are things that I would have changed about Irene if I had been one of the writers but then there are many things I want to change about myself and can’t. In this case I am going to think of Irene as person – not a representation of the female gender – and just accept that she has flaws but they do not make her any less brilliant.
-
-

A Journey of a Thousand Miles… 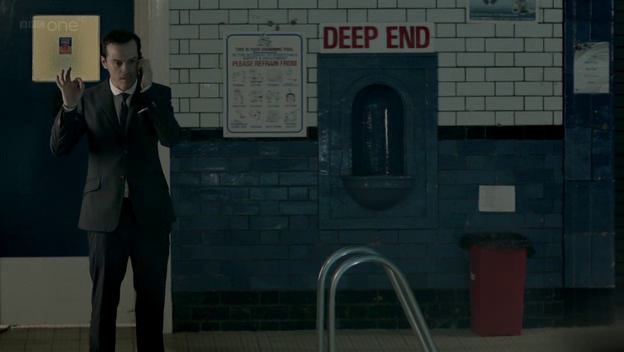 We can assume that before she made this phone call she had already obtained sensitive material on her phone. I had always assumed the sensitive information she had was the MOD email but there is no evidence at that time, Irene realised its importance or that she even possessed it. We do not know the timeframe over which she was being pursued by the Americans – it might have started just recently before Sherlock and John turned up (remember there is quite a long period of time between the pool scene and Sherlock meeting Irene).

At the time of the pool scene the MOD email could not have been the bait that Irene used to hook Moriarty because even if she had it she didn’t know why the email was important even or that it was important. The MOD man might just have been talking nonsense in an attempt to impress her and the code itself was a load of jumble even to a cryptographer. Moriarty certainly couldn’t figure out the information either because Irene had to manipulate Sherlock into given them both the answer when they realise it was important much later on.

So Irene couldn’t have got Jim Moriarty’s attention by saying “I have a nonsensical fragment of an MOD email that, according to the stupidly pathetic man who’s in love with me, is going to save the world.”

She must have had much more than just that email on her phone. As she suggests to Mycroft – she has all sorts of things on there and I certainly believe that she does.

The Americans were after her for one single email but it doesn’t mean that Mycroft and the British Government weren’t after her for much, much more.
-
- 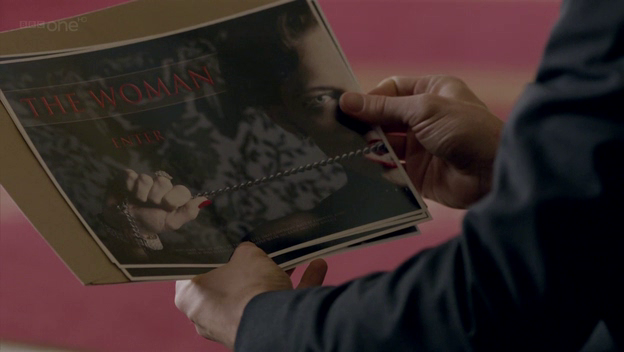 From the clients she chooses to engage with (high ranking police officer, best cryptographer in the country, an official from the MOD), I think her line of business is more than just being a dominatrix. I think the most lucrative part of her business is actually the information she gets out of her clients. I’m sure the thrill of having power over powerful people was also very enjoyable but Irene is a very pragmatic, cunning person and she likes money. (I think people over look the fact that the entire point of her plot was to extort billions from the British Government)

If you think about it, all the clients she has picked are exactly the kind of people that actual spies want to get close to - people with access to classified and/or sensitive information. Irene has basically set up the ultimate honey trap and she makes Anna Chapman (professional Russian spy) look like a complete looser.

Of course she’s not a professional spy –she doesn’t report what she finds back to some sinister foreign organisation. Irene is a freelance, independent stock broker in sensitive information and I think this definitely suites her personality.

However being a freelance information broker has its disadvantages

Customers for sensitive information do not appear like punters rolling up at the curb. Their reasons for wanting classified/sensitive information are definitely shady and as people they are probably even shadier. Her customers might work for a multitude of foreign intelligence services or be unofficial/commercial/terror organisations but these people are hard to find. This is why she needs Jim Moriarty. Not just to find these customers but also to make sure the deal is sealed without any of these people harming her.

I think initially Irene did manage to build a small network of contacts to pass information onto. However like any shrewd businessman when there is more supply than demand, Irene wanted to expand her business. This is the second reason she comes to Moriarty – she must have hooked him with an immediately financially lucrative set of documents. Imagine what other classified documents the MOD man might have leaked to her before the Bond Air email? As Irene say she usually likes to visit her clients more than once.

Let us not forget that Moriarty is still a businessman despite being obsessed with Sherlock. He might have thrown £30 million away to get Sherlock to come out and play but it doesn’t mean he isn’t looking to recuperate that money elsewhere. What Irene proposes is simple: she’s provides the data, Moriarty is the middle man and gets his cut of the profit which can be substantial.

Irene also needs to find her own protection and that is where her celebrity clients and her camera phone come in. Firstly, celebrity clients get one some exposure/publicity within their circles – yes she is extremely controversial but she’s not anonymous anymore. You cannot just make her disappear overnight and not have people ask questions. Secondly, there is no reason to believe that all of her clients hate her guts, she doesn’t openly screw over everyone she meets – it’s not good for business. Some of her clients might actually think they are in love with her. Irene has the great power of making people “feel special”. She can make people love her and love is much more vicious motivator – perhaps enough for a motivator for them to protect her against enemies foreign and domestic?

When all else failed she had the material on her camera phone to fall back on. When clients became threatening or violent – she can always pull out that smart little device. However I doubt this happened very often because Irene is perfectly capable of keeping her clients sweet.

Before the Americans started turning up with their armed hit squads, I think Irene’s protection was perfectly adequate. She had Jim Moriarty for the information customers and her own resourcefulness for her clients. Irene is a small-timer compared to the huge network of spies and informers that nation states employ. MI6 might have been aware of her before she threatened the Royal family but just as likely, she managed to fly under the radar. She’s very intelligent and Irene would have known how important discretion is. As long as her clients never linked security leaks to their own blathering, there is no reason why anyone would suspect a lowly sex worker and even if they did – she had enough on her phone to ruin them.

It was only when she realised that there were trained killers out hunting her that she started to fear.

The Anatomy of a Royal Scandal 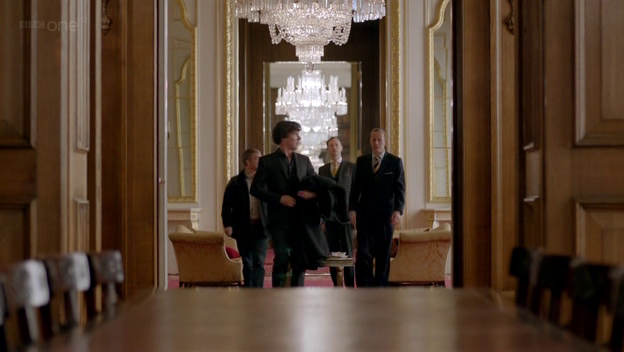 Whether or not Irene actually demanded something from the Royal family, we don’t know. Mycroft claims she didn’t because Sherlock doesn’t do blackmail - he simply tells them to pay her off. Telling the Royal family that she has the photographs does sounds like a prelude to making some kind of request or demand in the future   as well as a power play. I personally don’t subscribe to the idea that the Royal Family “have people whacked” – they are not that unrestricted or even that shady. They could easily provide her with enough money to get out of the country and change her identity but that’s not what Irene is aiming for.
-

Irene is aiming to extort billions from the treasury before she leaves the country (and yes she was plotting this before she knew about Bond Air as explained in Part 2).
-

Now that’s what I call ambition.

However the Royal Family can provide a good second avenue of escape if her plot goes to pot but this is only one of the reasons she informed them about the pictures.
-

There is no evidence at the beginning of ASiB that Mycroft sees Irene (and Moriarty) as anything more than mere insects – little conveniences compared to the broad power plays of entire nations. However both Irene and Moriarty desperately want his attention for very different reasons.

For Irene Mycroft is literally the key to the treasury. Her plot was never about Sherlock at all, he was at best a vital pawn and amusing distraction. Mycroft s probably the only man who has the power to authorise the transfer of such vast sums she’s demanding in one night. He has control over the spineless brainless government ministers and he can pull their strings like a master puppeteer. First she needs to get him to the negotiation table and there is no evidence that Mycroft took her at all seriously. He certainly doesn't take her threat to national security seriously given he has  real, highly trained operatives who could retrieve that cameraphone but he doesn't use them. Instead he opts for his little brother, a civilian detective

Moriarty obvious wants information on Sherlock but he’s perfectly willing to play along with Irene when they have the same goal in common.

When the Americans started chasing her – Irene must have realised she stumbled onto something really big this time – something utterly out of her league. It might have taken some time but she did eventually realise it was the MOD email. I think the first thing she did was use her own contacts and resources to try and crack it but when that failed she showed it to Moriarty.

Obviously Moriarty couldn’t make heads or tails of it either but he suggests a solution that will kill two birds with one stone - getting Mycroft's attention and cracking the code: GET SHERLOCK. The best way to get Sherlock was through his brother Mycroft who just happens to be very old acquaintance of the Queen.

Sherlock doesn’t get Irene’s camera phone and Irene learns to be careful what she wishes for because she really has attracted the attention of Mycroft Holmes with this shenanigan. I mean how forgiving is he going to be to someone who drugged his little brother? Now it’s personal.

From this point forwards the pair of them: Irene and Mycroft are locked in a ruthless game of chess

Other Parts in the Series: