Ginger with a Chance of Freckles - Chapter 10 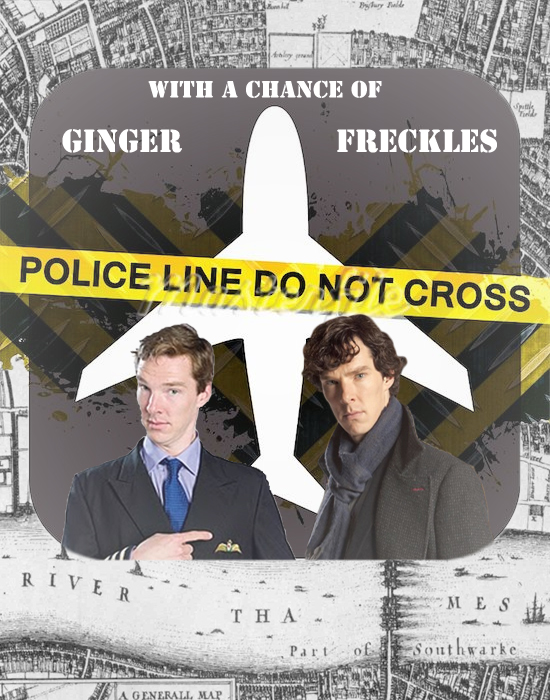 Title: Ginger with a Chance of Freckles

Summary: "Why did you never tell me about your little brother, Martin?" asked John, gesturing to the exhausted pilot sleeping on their couch.
"I tried to you," replied Sherlock, "but when you're here...you take over my mind."
Sometimes it takes an extraordinary event to make two people fall in love, in John and Sherlock's case it takes and extraordinary pilot: Sherringford "I-go-by-Martin-Crieff-now" Holmes.

The body lying motionless on the slab was respectably covered with a white sheet but even from several feet away the swollen features and the blue protruding tongue were enough to stop John in his tracks. All thoughts of berating Sherlock were instantly chased from his mind by the horrific imagine of the mutilated corpse.

“Sherlock! Jesus – what – happened?” demanded John leaning against the wall for support has he took several deep breaths to quail the wave of nausea rising in his throat.

“I told you,” replied the detective nonchalantly, “Lestrade had an interesting case. It appears we weren’t fast enough,” he threw John a mildly accusing look and continued unperturbed; “the morticians have washed down the corpse against my explicit instructions.”

“She looked worse than that – before?” asked John breathlessly.

“I assume so given that she was stabbed 38 times with a penknife and then once with a bayonet or other large long implement.”

“Or other long sharp implement – do keep up, John,” sighed Sherlock sounding exasperated.

“Two excellent questions,” responded Sherlock, his lips quirking into a smile, “but first we need to examine the evidence.”

With a flourish, the consulting detective whipped the cover sheet off the corpse like a magician revealing the finale to his show. John resisted the urge to gag as he saw with vivid clarity the terrifying injuries that were ferociously curved into the ivory flesh. The victim’s entire body was covered with deep inch wide wounds that still had layers of dark blood clinging to their jagged edges. In the middle of her chest, like the centrepiece to a grisly art display, was a huge gash extending right down to the breast bone. Despite his years in the armed forces and the horrific injuries he had helped to treat, the sheer malevolence of this murder was truly horrifying.

“The woman – clearly it’s a woman – is between eighteen and twenty five,” mused Sherlock seeming unaffected by the horrific sight in front of him. “Recently destitute, divorced, at least two children -,”

“-Wait,” said John putting up both his hands to halt Sherlock’s rapid deductions, “how -,”

“Elementary, my dear John – her left ring finger has a slightly lighter band of skin, clearly wedding ring but it’s been removed for a while, so divorce. The ring was expensive – she wore it in a bag around her neck, again notice the skin colour, but it’s not there anymore and yet she still has the bag.” Sherlock gestured swiftly towards a clear plastic container sitting on the table besides the corpse which John had failed to notice,

“So pawned or sold – recent destitution. The fact that she kept it shows sentiment – he left her. The stretch marks on her stomach – two distinct sets of different sizes: at least two separate pregnancies, maybe more. I have been reliably informed that after three pregnancies women no longer suffer from stretch marks given that their skin remains permanently extended.”

Even after hearing Sherlock’s deductions countless times, John still could not contain his amazement when Sherlock fired out ideas with such speed and ferocity.

“Brilliant? I know,” stated Sherlock arrogantly, “she’s also an alcoholic with decompensate liver disease, notice the large number of spider naevi on her torso and the extensive bruising around her wounds.”

The signs looked terribly familiar to John from the years he had spent as a junior doctor, treating the endless line of destitute alcoholics that frequented Bart’s hospital.

“She’s only at most twenty-five,” muttered John, “she must have been drinking heavily for the past ten years…”

“What?” asked John wondering how on earth Sherlock managed to figure that last detail.

“Train ticket found on the body, John – railcard open return to Lime Street Station and correspondence to an address in Liverpool, unopened and dated within the last week.”

“So she has a house in Liverpool?”

“No – her family have a house in Liverpool, the correspondences are always specifically addressed to her but none of them are utility bills. She doesn’t have a permanent address in London but is never the less far too clean for a homeless woman - most likely sleep on friends sofas, squats or uses a woman’s shelter.”

“Possibly, no bruising consistent with assault before the murder – murder probably didn’t even touch her with his own hands. Excessive amount of wounds suggests frenzy and anger, though but use of a weapon suggests emotional distance…”

“Wait, are we talking about the victim or the murders?”

“Murderer single, John,” snapped Sherlock impatiently, “do try and keep up. I read that post-coital hormonal changes can affect mental agility but seriously it’s been,” he paused to read his watch, “thirteen hours since we last had sex!”

Despite the fact that they were alone in the morgue, John felt a wave of embarrassment wash over his face. He could only glare menacingly at Sherlock whilst a tidal wave of red swept across his complexion making him blush to the tips of his ears.

“Sherlock,” he hissed, “we can’t discuss that here!”

Sherlock’s impervious expression morphed into something akin to confusion and then contempt. His deep blue eyes suddenly lost their excited sparkle to be replaced by a distant, cold look.

“I see…” replied the detective, turning away slowly to look back at the corpse.

Even though Sherlock’s thoughts were always a mystery to him, after three years of cohabitation John could tell when Sherlock was hurt despite the detective’s unbreakable façade.

“Sherlock – I didn’t mean it like that...” he stumbled over his thoughts, wanting to explain the sanctity of what their relationship but unable to find the right words, “I really loved last night, it was – it was brilliant.”

He waited patiently for a reaction, some kind of acknowledgement from Sherlock but none was forthcoming.

“I just want you to understand that it’s not really appropriate to talk about our love lives in – in a morgue. It’s not that I’m ashamed of what happened – I’m proud of my decision, Sherlock, and I would never regret starting this relationship.”

Sherlock turned towards him, his long dark coat swaying slightly with the motion.

“Do you mean that?” he asked solemnly, “not just using those words to placate me so that your life would be easier.”

John felt surprised and almost hurt at the accusation – he had at times pandered to Sherlock’s eccentricities to keep the domestic peace but he would never lie about his feelings.

“Everything I tell you about my feelings towards you is true and I stick by it” replied John stoically, “if you find it hard to believe then it’s not my problem.”

A small smile, barely perceptible, curved up one side of Sherlock’s pale lips,

“Well then,” replied the detective with a hint of mischief lurking in his otherwise cold tone, “I’m sure you wouldn’t mind holding the organs for me whilst I do an autopsy?”

Before John even protest at the insane scheme, Sherlock had snapped on a pair of gloves with lightening speed born from years of practice and thrust the poor woman’s liver right into John’s uncovered hands.

Martin had never met anyone like Molly before; she was sweet with a shy sense of humour that made her even more attractive than he first thought.

Despite the blood soaked tampons sticking out of her nose, Martin could not help but find her breathtakingly beautiful. He did not believe in love at first sight but the strange sensation warming his heart was probably the closest he had ever come to this mythical idea.

Molly had insisted that they come to her lab instead of accident and emergency. She did not want her friends down in the department asking awkward questions.

“So this is where I work,” said Molly in a nasal tone which Martin found to be completely adorable.

“It’s lovely,” he muttered not really looking around the room because he didn’t want to lose a single second of her beautiful sight.

“Seriously?” she asked half amused, half confused. “Sherlock says it looks like the recreational room at Broadmoor.”

“I didn’t know he had a younger brother, Martin, but I suppose we don’t really talk much – we’re more like colleagues than friends.”

Martin wasn’t exactly pleased at the whimsical note in Molly’s voice, though he was relieved to know that Molly considered her relationship with Sherlock as colleagues.

“So – what do you do down here?” asked Martin as she led him over to her work bench. It was tucked away in a corner of the pathology laboratory, just in front of the large glass windows overlooking the morgue.

When she saw Martin’s blank expression she decided to clarify, “I shave bits off dead people and then look at them under the microscope. It helps tell us about the cause of death.”

Martin swallowed reflexively and tried to imagine having to shave “bits” off a human corpse. The mere idea of having to touch a deceased person sent uncomfortable spasms through his stomach.

“That’s – nice,” he mumbled, wishing that he could think of another topic of conversation. “How’s that going for you then?”

“Oh I love my job, well apart from the times when you have to cut up children,” said Molly still sounding as if she had a very bad head cold.

“That – that must be pretty disturbing,” admitted Martin, wondering how his attempts at wooing Dr Hooper had morphed into a discussion about dissecting children. He had never been particularly successful with the opposite sex, though not from lack of trying, but five years at Harrow hadn’t exactly given him a good grounding in how to talk to women. Talking about dead children, though, had to be an all time low.

As he was racking his brain for something witty and intelligent to kick start the conversation again but the sharp clatter of metal disturbed him from his thoughts.

Molly had leapt towards the window and was now pressed up against the glass. Martin longed to stand right next to her but decided to keep a gentlemanly distance between them.

In the morgue below, he was at first disgusted to see a dissected corpse laying on one of the metal tables like a half butchered piece of meat.

However what was even more disturbing was the sight of Sherlock with his blood stained gloves cupping either side of John’s face whilst he kissed the doctor senseless as John held a pile of entrails in his arms.

4. The Good Doctor and His Boyfriend - 5.To Baker Street, with Love - 6. Brothers Brawl

Feedback really appreciated - take the time to leave a comment :)